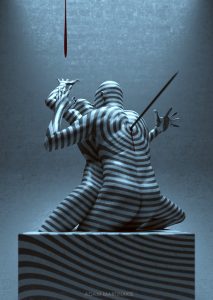 Juno is one of the many asteroids I discuss with my clients in my Asteroid Allies readings.  Since Juno is on my MC, my midheaven point of career, I’ve studied her significance quite a bit. Juno is a complicated archetype, which makes her fitting for relationships.  Juno was  the Roman equivalent of the Greek Hera, whose name splits into he era, meaning “the earth,” and also translated as “lady,” the feminine form of “hero.”

For the Romans, each man possessed an inner reproductive power called his genius, while each woman had her conceiving and bearing power, called her juno. Juno’s most important function was as a patroness of married women.  She oversaw all major social rites and customs, especially that of marriage.  From her name derives the month of June, which was sacred to her, and is still the month with the greatest number of marriages.

In one story of their origin as a couple, Zeus develops a romantic longing for his sister Hera as he spots her walking near a mountain.  He changes himself into a cuckoo bird.  In Greece, the cuckoo’s cries announced the rain that brought forth the food and fruits, so the bird was considered a harbinger of fertility. Zeus, as god of storms, then caused a powerful rainstorm to descend, and he flew, shaken and shivering from the cold into Hera’s lap. Hera took pity on the bird and wrapped it with her cloak.  Immediately Zeus took his original shape and ravished her. And here is the important point: Hera feels shame for her violation, and so marries Zeus out of guilt and obligation.

This version of the myth recounts to me the soul-contracts which two people fashion between each other in the spirit-world.  There is a sense of pathos, compassion, or divine pity we feel for those who are members of our soul-cluster.  We play various roles with them from one incarnation to the next, and we are obligated to do so, in order that we may grow and develop into a greater sense of wholeness. As we continue with Juno’s significance, we will see that she has much to say about our cosmic appointments and our karmic duty.

In one of my most important relationships, I met a woman the day after she found out she had gotten pregnant.  I immediately provided a nurturing role for her.  I showed up exactly at the moment when she needed the support of a spouse.  In studying our Juno contacts, I found that my Juno was within just a few degrees of her South Node, the point most associated with past lives, linking our souls across space and time, most likely as partners before. Juno transits can also signify when these key connections will seem to magically appear in our lives.

In another version of the Zeus-Hera myth, the two gods mate in secrecy in a palace beneath the sea on the island of Samos.  They partner up as equals, enjoying a three-hundred year honeymoon of limitless bliss.  But then the soap opera starts once Zeus brings Hera to Mt. Olympus, and rarely do we hear of any shared bliss between the divine couple again.

Why? As king of the gods, Zeus indulges in many affairs with mortals and immortals alike, at times arrogantly displaying his conquests for all–including his wife–to see.  In the stories, Hera repeatedly plots revenge, at times humiliating Zeus. The two punish and manipulate each other as only the best and worst of beloveds can.  This tragic component is fundamentally interwoven into our astrological Juno contacts, especially highlighted by the notion of the gods’ honeymoon, isolated in the palace beneath the sea.

One of my potent Juno contact was a relationship which began at Burning Man – an instant falling-in-love.  For a year, we navigated the long distance dance, which ultimately had an overwhelming sadness to it, where we wanted so bad to be with each other, but circumstantially could not.  Both of our Junos were conjunct, within just a few degrees, so that we mirrored our concepts of the sacred partner. Our few moments of re-union over vacation times were blissful, but recalled the ‘artificial heaven‘ of the Hera-Zeus honeymoon.

It is important to mention here how the aspect of undulation occurs in our Juno contacts.  Because of the depth of the connection on a soul level, we find ourselves possibly leaving and returning with these partners, The Greek myths emphasize Juno’s need for retreat in solitude and renewal, as her empathic link to Zeus seemed to require her to bathe in the waters of the spring of Kanathos to regenerate herself after hearing of Zeus’ love affairs..

The Juno role will be projected on anyone considered to be our “primary partner,” the person we check in with, the lover we live with, or the one we share our body and soul with–whomever knows us better than anyone else.  She is the one, whether male or female, who we bear our naked souls to in utter vulnerability.  This vulnerability is what frightens us, because we can no longer hide.  At any moment, that Juno partner can use their knowledge of our fragile and weaker parts against us. On the other hand, with a reciprocal bond of respect, the Juno partner can act as a guide who perceives the various layers of our psychological fabric, if we are willing to see ourselves mirrored.

The fears and promises of naked transparency with another demonstrate the Scorpio and eighth house flavor of Juno’s meaning in her revelation of certain pathologies in relationships—fears, sacrifices, power struggles, and also the potential of soul-blending. These fears include the fears of betrayal, abandonment, and even the overwhelming intensity of sexuality itself.  The fact that Juno has been in Scorpio since the end of 2015, is retrograding here and at the last degree of Libra in early Summer, and will not leave Scorpio until November suggests that all of our closest relationships will reveal our deepest shadows and test our potential for alchemizing the dark reflection into the light emanation.

You can check out you and your partner’s Juno and many other asteroids, like Vesta, Ceres, Eros, and thousands more on my new Asteroid Allies readings here.