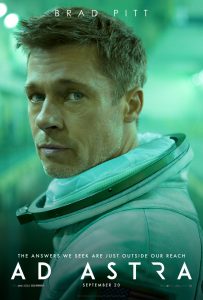 The new film Ad Astra stars Brad Pitt as an astronaut on a quest to find his father, extraterrestrial life, and a sense of meaning beyond duty. This essay focuses on how life and art not only mimic each other, but reflect the astrological charts of actors in their starring roles.

Although heavy-handed at times in its dialogue and symbolism, Ad Astra is a serious achievement in film, and will be appreciated by all those who love layers of archetypal symbolism. Pirates battle on the tourist trap of the Moon and man has colonized Mars. Astrologers will love seeing so many planets visited and their symbolism explored—I even wondered if astrologers were consulted during the making of the film.

Like Gravity and Interstellar, Ad Astra focuses on the theme of how space travel alienates one from the earth and human affairs, resulting in a severe disconnection from family members. Whereas Gravity reflected the Uranus-Pluto square that was just beginning to peak upon its release in 2013, Ad Astra reflects the positions of Saturn and Pluto near the Capricorn South Node during the Sept 21 release date, a transit which directly impacts lead actor Brad Pitt’s birth chart.

In studying astrology and film over the last 13 years, I hae found, as other astrologers, that actors tend to choose roles that reflect both their own innate astrological birth script as well as their cycles of forecasting.

Pitt is a Sagittarius Rising with his Sun also in Sagittarius—the sign of the vagabond philosopher on the adventure of seeking meaning in life. This Sagittarius Rising and Sun have been experiencing an expansive, inspiring, and joyous Jupiter transit through conjunction this year, which will peak with Jupiter on Pitt’s Sun in November, followed by 2020’s Jupiter transit on all of Pitt’s Capricorn grand stellium of five planets—Mars, South Node, Mercury, Moon, Venus. Perhaps with all this fortunate Jupiter energy, we will not only see an oscar nomination but a win.

However simultaneously, Pitt has been experiencing an ongoing intense and dramtic transformation from the planet of death and regeneration Pluto on his Mercury and South Node, thus marking his ugly 2016 divorce from Angelina Jolie, and deep journey into his soul and years of powerful personal therapy.

Currently, Saturn also initiates Pitt with his themes, since Saturn has hit all of the above planets in Capricorn. Upon release of the film Saturn had just changed direction (“stationing”) on his South Node in Capricorn, the symbolic point of the soul’s history, while Pitt is also experiencing the Nodal Return, which only occurs every 19 years. Thus, he is extremely sensitive to all of the Capricorn energy in his soul’s karma—this South Node can bring a heavy burden, a sense of overwhelming responsibility, a mandate to duty, themes of the father and genetic legacy, and a drive to success and ambition at the cost of all emotion.

Yet Pitt also experiences his North Node Return in Cancer, and in the film, as in life, we see an emotional breakthrough. Pitt is a father of 6, and has just begun a new relationship with a Cancer figure, a holistic healer and jewelry designer, who also follows the Sikh path, named Sat Hari Khalsa.

With all these cycles simultaneously, we watch Pitt portray stoicism (Saturn) with the undercurrents of unexpressed, pent up emotion (Pluto), Neptunian disillusionment, and the spiritual quest for truth, faith, and meaning (Jupiter). As an astrologer, I love that we see Pitt’s character in Ad Astra literally traveling to the Moon and Mars just as Saturn in the sky is transiting over Pitt’s astrological Moon and Mars!!

The opening scene shows Pitt’s Roy McBride, an astronaut receiving a psychological test, determining his inner stability for space travel. Legendeary for never letting his BPM rise above 80, even when he’s plummeting to Earth, Roy refers to sober, Saturnian states of mind—being “calm, steady, and without bad dreams” and proclaims the cold precision and high standard of Saturn in the opening scene: “I will not let my mind be vulnerable to mistakes.”

Yet, McBride then shares that the face of his successful astronaut is always a facade, something he’s been trying to get out of for a long time, yet he has been called to this since being a young boy by his father, tuning us into the Saturnian themes of paternal legacy, but also the Neptunian themes of camouflage, projection, and the false image or mirage appearance.

Ironically, McBride is commissioned to go to Neptune, where gamma ray bursts from an anti-matter device are causing power surges killing thousands, including astronauts and earthlings. And Neptune was where we last heard from McBride’s father, the respected pioneer of space travel whose entire mission was to “find our brothers in exaltation—” an alien kindred which he hopes will extend the family of God’s creation. Yet the theme of an ‘absent creator’—the weighty 3D world of law, order, body, and bone as harsh reality—reflect the Saturn vs. Neptune archetypal dynamic.

These words are taken from McBride’s father, who combines the Saturnian and Neptunian archetypes—he is deeply religious and believes in a “manifest destiny” of humans to colonize space. And he is literally found on a space station outside of Neptune.

As we lead to the encounter between father and son, we sense that father has gone a bit insane (Neptune’s shadow) in his pursuits for ET life, and has lost all contact with reality or with earth, both literally and in his soul. He even admists that he was never really meant to have a family or to be on the earth. This all reflects the Neptunian themes of a desire for transcendence, for opening to the Spirit world / altered consciousness, and for a psychotic break that can lead one to delusions of messianic grandeur. In addition, Neptune’s ethereal, spiritual, and generally nebulous nature reflects the anti-matter device which seems to cause the power surges.

Images of Saturn or Capricorn appear repeatedly and these obvious appearances as well as lines of dialogue leave little subtlety—they directly reflect the themes of alienation, fatherhood legacy, and a search for God. These lines include: “In the end, the Son suffers the sins of the father.”

Fatherhood is an especially important theme for Brad Pitt personally. About his own father, Pitt has said “My dad always said he wanted to give me a better life than he had coming from extreme poverty, and he did it. And it makes me think, as a dad, what do I have to offer that’s better than I had, to my kids?” Again, this connects to theme of Capricorn legacy – an archetype whose highest expression may be the Native American adage to make decisions in a way so that the next Seven Generations will be positively impacted.

Pitt also has 6 children with Angelina Jolie, some adopted, some his own, and he was estranged from them for much of the last few years during his divorce proceedings, just as Roy McBride is estranged from a father he thought was dead, but is still alive near Neptune.

Other archetypally resonant lines include when McBride states “So many times I’ve screwed up,” guilt and impossible standards being extremely Saturnian / Capricornian as well as putting labels, definitions, and boxes on and around everything suggested by the statement “I’ve been trained to compartmentalize.”

Saturn and Neptune also battle it out thematically here and in Pitt’s own life. We addressed the many transits of Saturn in Pitt’s life, but should add that Saturn is a sobering planet, a reality check which distinctly showed up as Saturn crossed Pitt’s Ascendant and Sun during his divorce with Angelina Jolie. Ironically, Pitt also has had Neptune squaring his Sagittarian Ascendant adding an invitation for spiritual growth and prowess in his creative work as an actor.

Pitt, who recently became sober, also opened up about his divorce and former relationship with alcohol to CNN. “What I realized is that I was running to avoid tough feelings, painful feelings….” And continuing the positive Saturn and Neptune transits, “I want to sit in it, I want to feel it, I want to get through the rough night. I found in doing so, you come out the other side with a more profound understanding, of yourself and a greater gratefulness of those in your life.”

One of the relatively contrived images that still retains poignancy juxtaposes Saturn’s sense of entrapment with Neptune’s return to innocence. It features a bird cage next to a teddy bear and doll as McBride discusses his father’s mission with another female astronaut who becomes key to his odyssey to Neptune.

There is a particular shot in the film where the overhead door and its crossbars are the exact shape of a Hexagram. Is it a wild coincidence that if you study the North Pole of Saturn, you will find that the direction of the gases form a heaxagram, once again suggesting the geoemetric order, symmetry, and structure of Saturn’s archetypal symbolism?
McBride’s father first left on his mission as part of the Lima Project when he was 29—the exact year that each individual experiences their Saturn Return, when Saturn comes back to the position of one’s birth and brings up every theme we’ve thus far discussed.

There are moments of Neptunian altered consciousness aboard a spaceship as characters consume something that appears to be like laughing gas. Behind McBride, we also see images of the ocean (Neptune) in the “Comfort Rooms,” places that are supposed to calm and tranquilize and nearly sedate the anxiety of astronauts and required in order to pass the psychological tests.

Additionally, the Lima Project—the name for the mission to find ET life out to Neptune and beyond—suggests Peru and the plant medicine spiritual traditions of the Amazon.

As we can see, Saturn and Neptune symbolism appear strongly throughout the entire film, extending as well into the realm of relationship even as the film mimics Pitt’s real life.

One cannot ignore the fact that actress Liv Tyler, McBride’s wife, looks almost identical to Pitt’s real word ex wife Angelina Jolie. He only hears from her and her disappointments in their relationship through a screen (Neptune’s long-distance relational theme and Saturn’s harsh professional duty that requires a choice of work over family.)

As the tagline to the film states, “The answers we seek are just outside our reach.” The layers of archetypal symbolism throughout the film are seeminglye endless, so it’s best for you to go experience it in IMAX and receive their magic yourself.

Ad Astra: To the stars and beyond.