Venus and Mars Lines – All’s Fair in Love and War

One of the most revealing techniques in Locational Astrology is called Local Space.  With this tool, we can see what areas of the earth will invite a certain kind of energy to emerge for you.  We can also think of Local Space as places where specific planetary “teachers” will profoundly influence all aspects of your life.

A quite obvious example of Local Space occurs for former President George W. Bush in Iraq, the exact location where his Mars line emanates.  Mars is the god of war, battle, confrontation, aggression, and rash decision and phrases like: “You’re either with us, or against us” or “The Axis of Evil.”  (Bush also has a Mars line through Afghanistan – Mars is on his angle of career there.  Whatever planet may be on this angle is what we are recognized or remembered for in a certain location.) 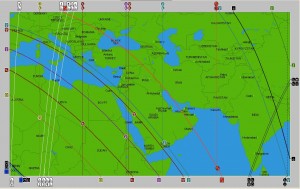 Bush’s Local Space Sun line goes through Texas, where he has achieved incredible solar popularity and where his fame first began.  Also, Bush’s Sun is in Leo, sign of governance, rule, and in its shadow, self-righteous arrogance.  The sun rules Leo, strengthening Bush’s Sun in Texas and influencing his rise to the Leonine ruler of governor in that state. His Local Space Saturn line, which represents where we must put dedicated effort and discipline,  goes directly through Austin, Texas where he worked as the governor of the state.

In my own life, I traveled to a Venus Local Space line when I taught at the Boom Festival in Portugal in 2010.  This line crosses southern Portugal and Spain.  In addition to love, Venus rules both aesthetics and the attractive principle.  I met numerous beautiful people, felt a sense of popularity, ease, and pleasure, discovered music I adored, and swam daily in the exquisite waters of the lake.  Venus lines also bring women into prominence in our lives.  Within a day, I met a woman with whom I shared a profound sense of familiarity, especially of being past life beloveds.

My Venus is in Gemini as is hers. Gemini themes of teaching, travel, language, and even sibling rivalry dominated our connection.  We met after I taught an astrological workshop, discussed astrological systems and esoteric teachings of the Egyptians and Maya, often spoke both English and Spanish with each other, and traveled together across the Spain and Portugal—all of which support the Venus in Gemini themes of attraction—foreign tongues, accents, enticing information, and busy city travel by car.  I also wrote many short stories, not common for me, in this short trip, and Gemini is the sign of the writer.

For more on Venus’s Love Lines and Brad Pitt